This article has been provided by Dr. Omer Tigani, Organizational Excellence Specialists

Introduction
There is a commonly used saying that ‘people are the backbone of any organization’. However, it is suggested that human resources provide even more extensive support as they are at the heart of the entire management system, producing products and delivering services and enabling the organization to remain relevant and to survive in the marketplace. So how does an organization capitalize on this most important asset, build on the talent of their people and develop highly effective teams?

Highly Effective Teams
A team is a group of people working together to achieve a shared purpose and goal(s). Human resources of today’s organization tend to perform their day-to-day operations in teams. Those teams can be structured according to the organizational chart or can be unstructured and teams can be permanent or temporal. Table 1 describes different types of teams. The individuals in highly effective teams are committed to results, accountable and consistently deliver superior results and exceed expectations. The success of the team is paramount and supersedes the personal agenda of any one of the team members

Tuckman Team Model
In 1965, Bruce Wayne Tuckman (researcher, consultant and Professor Emeritus of Educational Psychology at Ohio University) proposed the four stages of group development (Forming, Storming, Norming, Performing) as necessary and inevitable stages or phases that should take place in sequence for any group of people or team to grow and achieve a desired outcome. In 1977, Tuckman added the fifth stage Adjourning (Figure 1).

In light of the Tuckman Model stages, there is merit in discussing the dos, don’ts and the role of team leaders at each stage that contribute to highly effective teams in organizations.

Stage 1: Forming
Highly effective teams are formed from individuals who possess the suitable knowledge and experience necessary to achieve the desired outcomes of the team.

Having the work processes set and the roles and responsibilities of team members identified and agreed upon in the Forming stage are extremely important to help the team cooperate and work together to achieve a successful outcome. For highly effective teams, roles and responsibilities should be established fairly among the team individuals and in careful consideration to their background and experiences.

In the Forming stage, the highly effective team drafts a Communication Agreement in which vertical and horizontal channels are identified. This Agreement sets the expectation for each team member such as: how feedback should be given, what to do when expectations are not met and how to respond to feedback, and so forth.

The team leader plays an important role in setting the team rules and core values. Some commonly used core values may include:

Stage 2: Storming
In the Storming stage, it’s a newly formed team with individuals that have been recently brought together. These individuals have different backgrounds, experiences and personalities and each team member may join with his/her own understanding, priorities and agenda. Although the team’s direction may have been set in the Forming stage, there may be differences in perception when the team puts the plan into action. As a result, disputes and differences may arise and affect team performance.

Effective communication is the key to overcoming these differences. The team leader must be a good role model for effective communication. This role is characterized by communicating clearly, being straightforward, providing constructive feedback and listening actively. As Tom Peter’s says “team leaders should not be 18-second managers”! Effective communication will play an important role in building trust among the team members and will pave the way for them to feel confident about peer intentions and alignment with the agreed upon direction.

Managing conflicts will also be important at this stage. Conflict can be defined as ‘any tension, real or perceived, visible or hidden, clearly understood or not, between the important interests held by one or more people’. Team leaders must consider the breadth and depth of conflict when trying to manage it.
For example:

Stage 3: Norming
Once conflicts are effectively managed in the Storming stage, the Norming stage has team members focus on setting norms and ensuring all work processes are in place and functioning well for the benefit of the team. The level of team cohesiveness at this stage is largely determined by the level of conformance to the acceptable behaviors and agreed upon norms.

Most often, the Storming stage overlaps with the Norming stage. This overlap is due to the following:

Norms of behaviors for highly effective teams include:

Particularly important at the Norming stage is a principle common to the culture of high performing organizations – alignment. Alignment reflects the understanding that the “organization is a system of interrelated and interconnected work processes and that all activities need to aligned with the established direction” (Source: Organizational Excellence Framework, 2010). The leadership team establishes the strategic direction for the organization and reflects the direction in corporate statements (e.g. vision, mission, core values) and plans that have goals and objectives. Every effort should be made to cascade these statements and plans throughout the organizations so that all undertakings serve a common aim and resources are used wisely.

Stage 4: Performing
Teams that reach the Performing stage are mature – work processes, roles and responsibilities, team rules and the communication agreement have been well established and tested. The focus of the team at this stage is on managing performance, evaluating performance and achieving the team goals. Although conflicts may still arise, these conflicts continue to be managed well given the relationships that have been developed and strengthened over time and the norms of behaviors that have been established.

At this stage, the Effort Grid (Figure 2) illustrates how the effort and talent of each team member will contribute to the strength of the overall team. To realize and maintain high team performance, it is recommended that team leaders:

For the team leader, using the foregoing approach will clearly reinforce the talent and effort that are desired and required from team member and that will be rewarded. 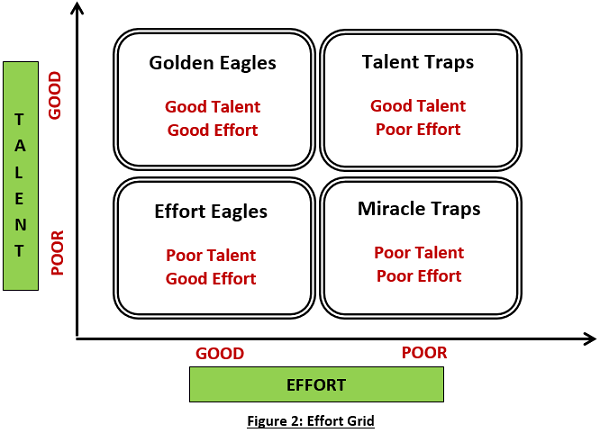 A practice common to high performing organizations is to share leadership with employees (Source: Practice 2.12, Organizational Excellence Framework, 2010). This practice helps team members learn about the leadership role (e.g. chair a meeting), enables them to have a new experience (e.g. lead an improvement initiative) and builds their commitment as they accept responsibility and accountability and feel a sense of ownership over the task at hand. This practice is beneficial for the organization too as it helps to develop the leadership skills of and showcases different leadership styles to team members.

Conclusion
Tuckman presented a powerful model that every team leader should be familiar with prior to leading a team. Leaders of highly effective teams should plan ahead and prepare for each stage of the Tuckman Team Model. In doing so, team leaders who understand the typical stages of team development will be agile and able to respond efficiently and effectively to most scenarios that arise during the life cycle of a team project. This preparation will help the team to perform well and to achieve its mission, goals and objectives at the desired level of quality, at a lower cost and within the set timeframe.

Dr. Omer Tigani is a quality management and organizational excellence consultant and expert with more than 18 years of experience blended with academic and professional qualifications in the field from Canada, United States, United Kingdom, Belgium and Switzerland.
Utilizing various quality approaches (ISO standards, excellence models) and quality tools (six sigma), he has led organizations to design and establish robust management systems and to build organizational capabilities that enable the achievement of continually improving and sustainable performance.
Dr. Omer has presented at conferences in the United States, Qatar and Sudan and has published peer-reviewed articles in international magazines with ASQ (Quality Progress, Journal for Quality and Participation). He is a licensed professional with Organizational Excellence Specialists and located in Canada.
LinkedIn https://www.linkedin.com/in/dr-omer-tigani-86125b1b/