As I was giving a fleeting glance to the many fascinating books at one of the stimulating bookstores at the Dubai International Airport Departures Terminal, the title of a book caught my attention, ‘MY VISION – Challenges in the Race for Excellence’, by Mohammed bin Rashid Al Maktoum. Considering the fact that I was typically running short of time to board my flight, I had to reluctantly place the book back to its original position, but with an awe mixed with curiosity lurking within me that said, “His Highness – The Ruler of one of the most loved and influential cities in the world is explicitly acknowledging the tests and trials of running the multifaceted and magnificent city of Dubai!’ That’s striking!”

My journey from where I started research writing for some of the Dubai We Learn projects, to going back with the fabulous and fulfilling experience at the Dubai Government Excellence Program’s 2nd Knowledge Sharing Summit, 2019 now astonishingly seemed to have taken a full circle! I now envisage how the day-to-day governance of Dubai resonates with its topmost leadership – the Ruler’s drive for excellence. ‘Dubai We Learn – Excellence Makers Program’ is homogenous with his broader vision to make Dubai the happiest and smartest city in the world – for the Dubai population and the millions of its annual visitors that it embraces.

Initiatives like the Dubai Government Excellence Program (DGEP) constructively nudges the government authorities to question the status quo and not become complacent. The program also helps to shatter the far-sighted challenges that are destined to arise in this massive responsibility called public governance.

The entire arena seemed like a wonderland for anyone with a hunger to know Best Practices in the specialized field of public administration. For me, the experience was not just enlightening, it was humbling as well. Afterall, it takes humility and a strength of organisational personality that, in spite of already being accomplished in the field of governance and acute decision making for years and decades, the team members were inquisitive to learn and explore like a nascent intern.

The Center for Organisational Excellence Research (COER), New Zealand, has been orchestrating the learning, knowledge gathering and wise execution of the Dubai We Learn initiatives (now in their 3rd year cycle) in tandem with DGEP. COER amiably assist the teams to use the TRADE Best Practice Benchmarking Methodology to find and implement best practices and empowers the teams to reach a 7-Star level of excellence that assures long-term sustainability and future relevance. 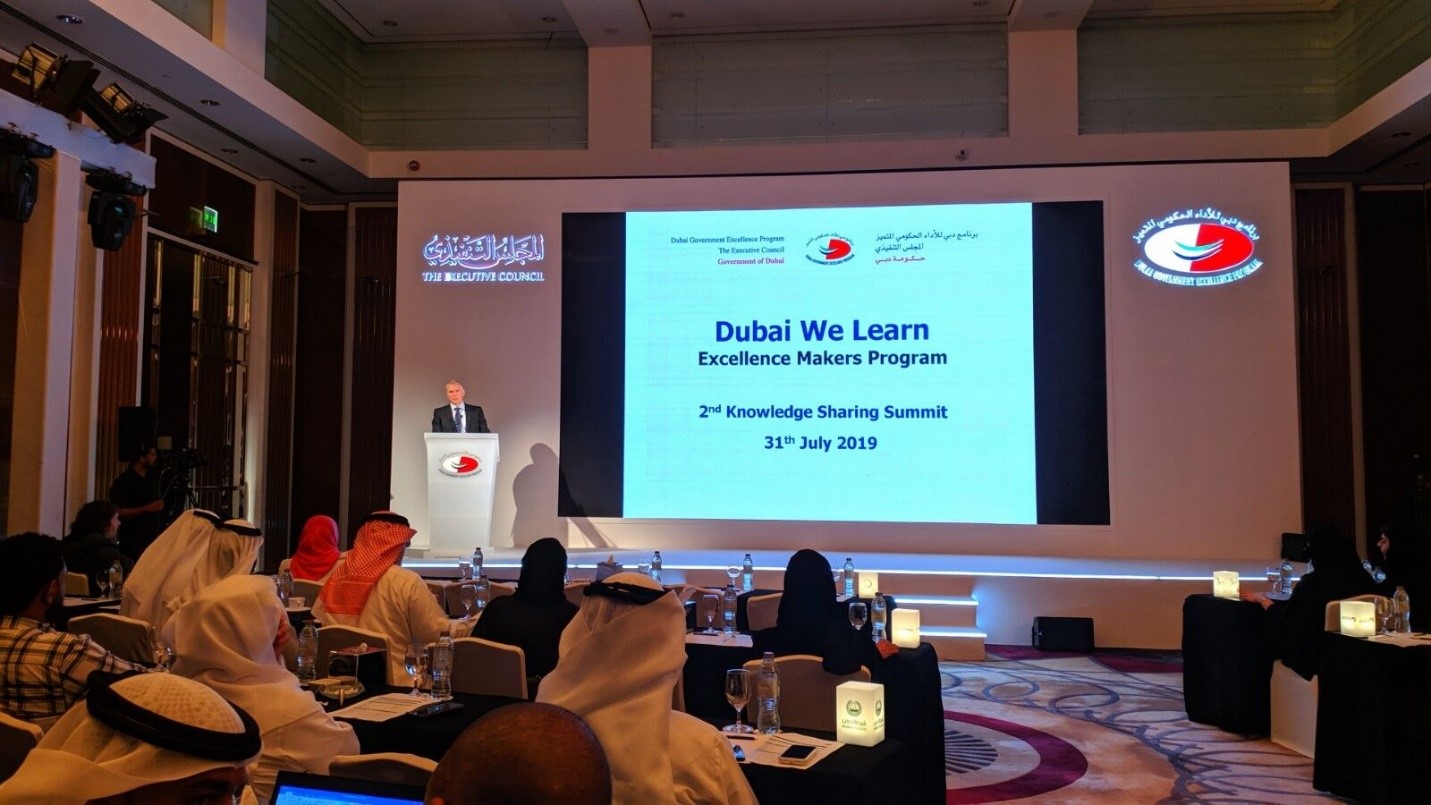 Dr. Robin Mann – Director, COER, enlightening the teams on the future course of Dubai We Learn 2019

In the earliest hour of the 31 July ‘19 Summit before the team presentations, Dr. Robin Mann – Director, COER, emphatically laid out the pertinent highlights with respect to the present & future direction of the 11 projects:

Watch video highlights of the day

During the team presentations, the five core elements that were predominant across all the eleven DGEP projects were:

A collage of photos from the 2nd Knowledge Sharing Summit

Following are the 11 Government of Dubai entities and their project initiatives:

After the first session of the Summit while I was in an engaging conversation with Maha Al Suwaidi, Project Manager, Dubai Government Excellence Program, she said,

While in the middle of a stirring dialogue with Dr. Ayesha Al Mutawa, Director Strategy & Excellence at the Dubai Corporation for Ambulance Services (DCAS), she articulated her experience with enthusiasm and optimism

When asked how will the DWL put Dubai on the world map in the field of innovation and business excellence, this is what she had to say,

Dr Ayesha’s presentation on DCAS’ Innovation Project was one of the highlights of the day. A copy of her presentation can be found by clicking here and is well worth reviewing. Not only does it show the progress being made by the DCAS team but it also shows a best practice in terms of presentation slide design!

The cross-team formation and discussion session nearing the concluding part of the Summit saw the bartering of ideas between the teams. Each team was given a yielding task – to describe the one thing that each of the 11 teams has done exceptionally well, any common opportunities for improvement, one potential challenge or difficulty that each team may face, and (if so) how could these be addressed? The teams shared their expertise and experience in the most lucid and transparent manner.

Although AI is a sign of human advancement, it can never replace human conscience. And the beauty of human conscience is that it can alone shape the character of governments. Sir Abraham Lincoln had once insightfully quoted, “The philosophy of the school room in one generation will be the philosophy of government in the next.” And in this case, Dubai edification has most definitely produced the wisest leaders – the government office bearers of today, who are inspiring the future torchbearers to lead a responsible-benevolent public administration.

I, personally, and on behalf of Dr. Robin Mann, Mr. Ahmed Abbas, the COER team members and all the 12 Researchers who have contributed to the 11 DGEP projects, wish all the ‘Dubai We Learn’ initiatives all the very best!

… Stay tuned with Dubai We Learn Blogs @BPIR.com Limited for updates from the 3rd and Final Knowledge Sharing Summits that will be held in October 2019 and December 2019 respectively.

To view more photos from the event click here

Keep informed on best practice research and business improvement events from around the globe and receive a complimentary Best Practice Report of your choice.