Leadership Insights from the Baldrige Award-Winning City of Germantown 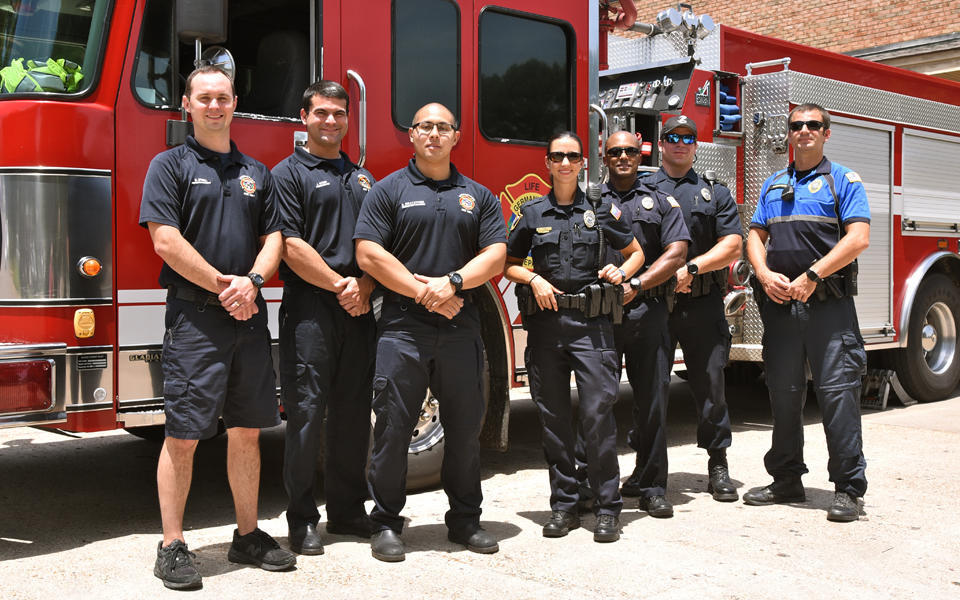 When the City of Germantown (TN) was named a Baldrige Award recipient in 2019, the small suburb of Memphis (just 20 square miles in size) became only the fourth city to earn the prestigious, Presidential award for organizational excellence.

During the Baldrige Program’s 32nd Quest for Excellence® Conference this year, Germantown City Administrator Patrick Lawton highlighted how his organization uses the Baldrige Excellence Framework to achieve and maintain high performance to serve its community.

Established in 1841, the City of Germantown is a municipal corporation whose powers are defined by a state charter. As city administrator since 1989, Lawton is responsible for the organization’s day-to-day operations. As he manages a team of professional public servants, he’s guided by the City’s—and International City/County Management Association’s—code of ethics.

Regarding the City’s status as a Baldrige Award recipient, Lawton stated, “This recognition represents years of hard work and determination by city staff and senior leaders to be able to say, ‘There is a new paradigm for the delivery of public service in our community focused on performance excellence, results, and continuous improvement.’”

“As a local government and a recipient of the Malcolm Baldrige National Quality Award,” Lawton added, “we shall serve as that ‘city upon a hill’ for our citizens and a role model for other cities across the country.”

Why Baldrige?
Noting that his city began using Baldrige principles during the “Great Recession” (circa 2007), Lawton said, “We embraced the Baldrige [framework] as a way to manage the delivery of municipal service in the most responsive and responsible manner.”

He added, “Our Baldrige journey has taken us far, and recognition by the Baldrige Performance Excellence Program is an amazing achievement on our continued path toward sustained excellence for the citizens we serve.” 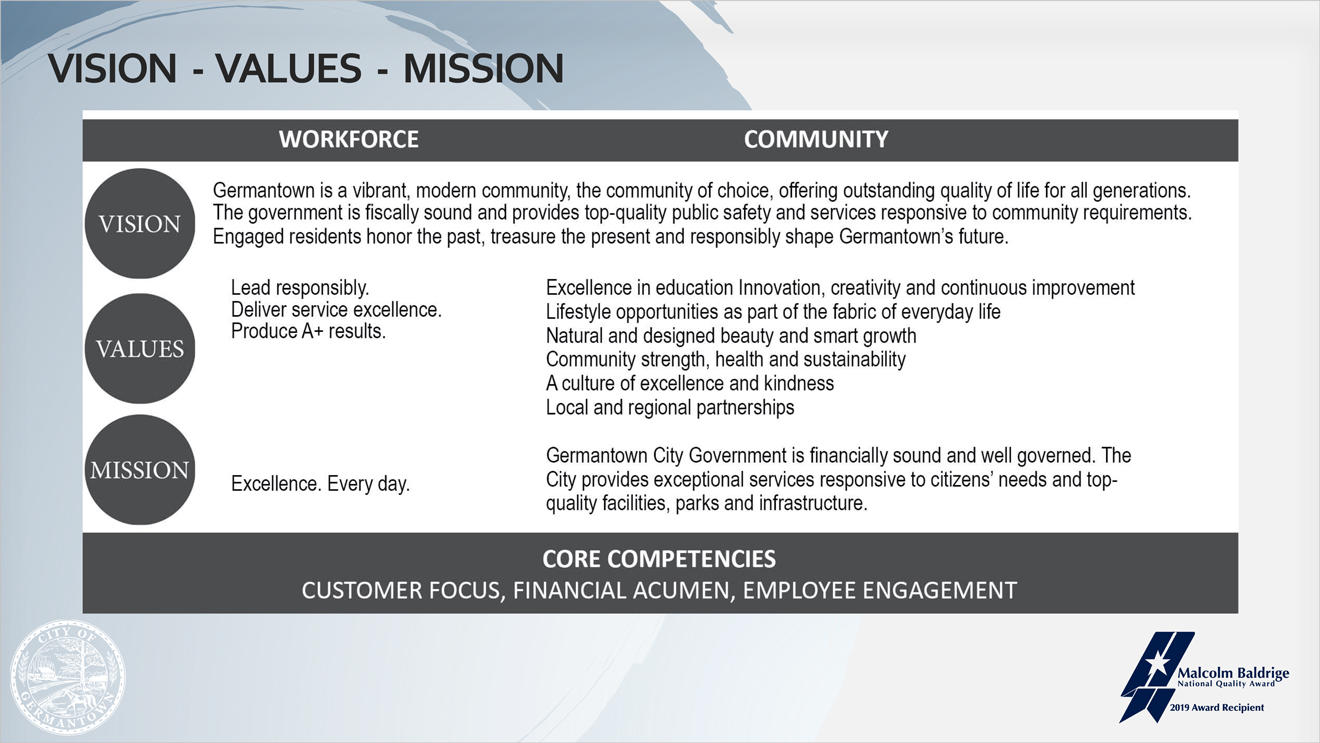 City of Germantown’s vision, values, and mission, as conveyed during its senior leadership plenary presentation at the Quest for Excellence Conference in April 2021.

Excellence Every Day
Lawton explained how the City of Germantown’s adoption of the Baldrige framework is conveyed in its mission statement “Excellence, every day,” which sets the expectation for high performance by employees. “Excellence every day is not just a tagline but what we expect from our employees each and every day when they arrive on the job site,” said Lawton. “It’s what’s expected and what we deliver.”

“We ask three simple things,” he added. “… we want them to lead responsibly, deliver service excellence, and produce A+ results.”

He said the City ensures that its workforce of approximately 445 full-time employees is highly trained by providing training and advancement opportunities through its individual employee development program. City employees are “competitively compensated,” he said, because “we want to lead this area in terms of classification and compensation; we think of ourselves as [being] in the talent business and not just hiring a warm body to fill a position.”

Through long-range strategic planning, the City developed its vision, values, and mission statements, which are backed up by the value-based principles of Excellence in Education; Innovation, Creativity, and Continuous Improvement; Lifestyle Opportunities as part of the Everyday Fabric of Life; Natural and Designed Beauty and Smart Growth; Community Strength, Health, and Sustainability; a Culture of Excellence and Kindness; and Local and Regional Relationships.

“The People We Serve”
The City’s mission in relation to its community, said Lawton, is “to understand that we will be financially sound and govern and that we will be good stewards of the tax dollars that [residents] have entrusted to us.”

The City has defined its 41,333 residents as key customers, in other words, “the people we serve.” Lawton explained that the City segments these key customers by geographic area, length of residency, age, and gender as it gathers and reviews data and information from an annual survey of residents and takes action to better serve them.

The City’s stakeholders include its partners and collaborators. “We have to rely on local and regional partnerships to make what we do in Germantown happen,” said Lawton. Thus, he emphasized the importance of identifying and understanding these stakeholders—which users of the Baldrige framework do in filling out the Organizational Profile (the prefatory section of the Criteria for Performance Excellence).

The City offers its customers and stakeholders a range of services, which are identified as “product offerings” within the Organizational Profile of the Baldrige framework. “Our key products and offerings [are] defined by our city charter,” said Lawton. These include meeting basic needs such as public safety (through police, firefighting, and emergency medical response services); education (the City’s municipal school system was created in 2014); economic development (though the City is primarily a residential community, Lawton noted that transportation and job opportunities/growth, as well as planning and land use services, are critical to its long-term sustainability); utilities (sewer and water services); and sanitation services (including trash, recycling, and yard waste collection, which are outsourced through the City’s managed competition program).

Strategic Challenges and Opportunities
Lawton identified the following as the City’s key strategic changes and opportunities:

City of Germantown’s Factors of Success, as conveyed during its senior leadership plenary presentation at the Quest for Excellence Conference in April 2021.

Success Factors
“Our factors of success boil down to our core competencies,” said Lawton. “In the beginning when we were looking at core competencies, we had multiple ones, but as we matured in our Baldrige process, we realized there really are three.” He referred to these as “the things that we feel we do better than any of the organizations the City considers competitors”: