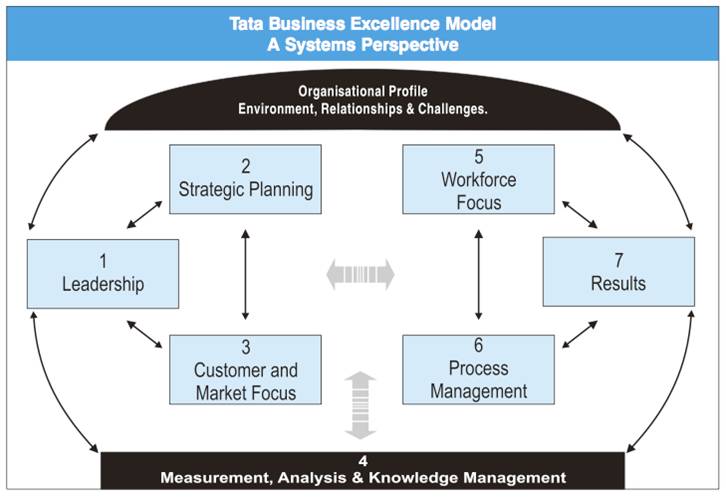 The Baldrige framework for Business Excellence has been used as an award framework in many countries around the world for more than two decades. However, it has been shown that organisations get the most benefit if they embed the business excellence concepts into their systems and processes and undertaken annual self-assessments against the framework.

One organisation that has truly embraced business excellence is the Tata Group. Tata group comprises over 100 operating companies in seven business sectors: communications and information technology (Tata Consultancy Services were a runner up in the overseas category for the NZ Best Practice Competition 2012), engineering, materials, services, energy, consumer products and chemicals. The group has operations in more than 80 countries across six continents, and its companies export products and services to 85 countries.

The group started to implement the framework in late 90’s and called it Tata Business Excellence Model (TBEM) which is ‘customised-to-Tata’ adaptation of the Malcolm Baldrige model.

Performance is measured in absolute points; companies have to achieve a minimum of 500 points (out of 1,000) within four years of signing the Brand Equity and Business Promotion (BEBP) Programme agreement.

If you live in North America, you’re probably familiar with Tetley, Good Earth, and Eight O’Clock coffee. These brands are among many owned by some of the more than 100 Tata companies, spanning six continents, whose combined revenue was $83.3 billion in 2010-2011 and whose combined global workforce is over 425,000. Based in India, the multinational conglomerate known as the Tata Group operates in more than 80 countries and exports products and services to 85 countries.

What you might not realize is that Tata companies have been using the Baldrige Criteria for Performance Excellence for more than 15 years. While each Tata company or enterprise operates independently, all Tata-branded companies use the Baldrige systems framework. That’s because all Tata companies benefit from using the Tata Business Excellence Model (TBEM). The TBEM is based on the Baldrige Criteria for Performance Excellence and maintains the seven categories of the Criteria framework by name. To license the Tata brand, each Tata company must sign a legal agreement with the Tata Group holding company, Tata Sons, that ensures that it will follow Tata’s code of conduct and the TBEM.

According to Tata Quality Management Services’s Sunil Sinha, Tata companies began using the Baldrige Criteria for Performance Excellence in the early 1990s. Based on their success, the Tata Group formally adopted the Baldrige Criteria and introduced the TBEM in 1994. Since then, the conglomerate has continually adapted its use of the Criteria to its strategic situation, bolstering self-assessment questions to strengthen each Tata company’s strategy. Tata also has added emphasis on systematically focusing on innovation as it uses the Criteria in its internal performance assessments.

As Sinha affirmed in a recent phone interview, the Tata Group maintains a reputation for strong corporate governance values and practices that reflect a responsibility to society and the environment. “We realized that a group that has global aspirations needed to be strong in [Baldrige Criteria item] 1.2,” he says. So, among other adaptations of the Baldrige Criteria scoring system, Tata companies receive separate scores on their safety processes and safety results in TBEM assessments, and if they score relatively low in safety results, points are deducted from their score on leadership processes.

Sinha presides over the Tata Group’s TBEM assessment process in his role as chief executive officer of Tata Quality Management Services (TQMS), a Tata division that helps other companies in the conglomerate improve their performance. TQMS conducts three kinds of assessments: (1) Basic: a high-level, fundamental assessment tailored for companies at relatively lower levels of maturity that quickly identifies key opportunities for improvement; (2) Standard: a fuller Criteria-based assessment like those of the Baldrige Program’s annual award process; and (3) Intensive: a detailed examination of the Tata company’s strategy and processes, which considers the robustness of its improvement strategies. This is done for the more mature companies and typically is more prescriptive.

For the past 18 years, each Tata company receiving a TQMS assessment has received a site visit as part of the process. “Every company, whether low-scoring or high-scoring, gets a site visit because we want to give them an opportunity for learning,” says Sinha. During a site visit, a company receives a set of Criteria category scores and category-by-category presentations on its performance; later, it also receives a detailed feedback report. In each case, a TQMS consultant supports the assessment team in ensuring a high-quality assessment. The assessment system also helps each company create action plans based on the feedback, with a TQMS account manager assigned responsibility for helping the company improve. This account manager works jointly with the TQMS consultant who assisted the assessment team in interpreting the feedback for the assessed Tata company. To prepare internal assessors for this process, the TQMS division trains about 3,000 managers every year from across the Tata Group companies. “This allows for cross-pollination and builds managerial capability across our companies,” says Sinha.

As a result of the use of the TBEM and assessment process, Sinha has witnessed significant benefits to Tata companies around the world. “We have seen a lot of companies becoming more competitive, customer-oriented, and process-focused,” he says. At the same time, he stresses, “The program is an improvement process, not an award process.” According to Sinha, the key insight that the assessment process must be part of a company’s ongoing performance excellence journey, and not a short-term focus on winning an award, led Tata to rename the model TBEM from an award program originally named for the Tata Group’s former chairman, JRD Tata. “If [the TBEM] is treated purely as award criteria, there could be some resistance to embark on the journey,” says Sinha, adding that this risk is particularly strong where a company’s market is very demanding. However, he says, if use of the business excellence model “becomes part of a focus on continuous improvement, more companies will benefit from it.”

In one of Tata’s Leadership Thoughts videos, Sinha explains more about Tata’s use of the Baldrige-based TBEM program. Another video tracing the evolution of the use of the Baldrige Criteria through Tata’s Business Excellence Model may be found here.

Clearly, Tata’s internal Baldrige-based business excellence model and assessment process have created a unified system to promote performance excellence in its companies around the world. Is it time for your company to start reaping similar benefits from a Baldrige improvement journey? Get started here. Or, if your organization is already using the Criteria to great benefit, please share your story!